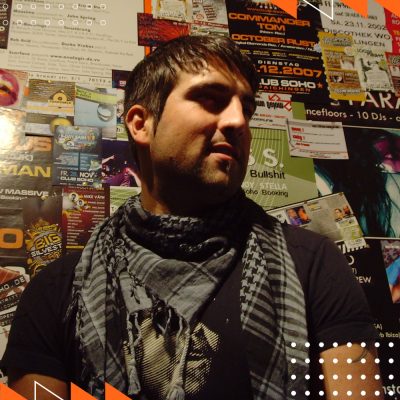 He is called MesU.T. and came middle to deal of 90’er on the taste with electronic music. Very early he also started to be interested in everything around the Dj. After several approaches he got the resident place in the tunnel (Gosheim) where he got to know then also S.K.A.T.I. With Him he organised once a month to divide very successful parties in the disco WOM (Balingen) under the name „Symbiosys“. Then he did small-time above all with S.K.A.T.I., however, also alone through nice South Germany. Since 2006 he plays in whole Germany and has created it also to a resident place in the club Soho (Spaichingen). He still has big interest in producing. His first publication „Zukunftsmusikclown Ep“ comes out on Chaos Netlabel. Other tracks of him are quite ready and he works on and on it. Now since beginning of 2010 he also is Resident in the disco Wom which had moved, in the meantime, to Hechingen where he denies a Floor also every Friday and also invites regularly guest Dj’s. At the same time he has also founded the agency Feierkind with your activities can look after an artist all around and support. Out of this also originated the idea for his own label Feierkind-Records. With all what has lately done itself with MesU.T. one may be stretched on a successful-promissory career which keeps never waiting with such an ambitious artist long.

He would describe his style as follows: Good Techno 😉 He plays still with Vinyl!